Apart from graffiti, street art has successfully conquered its place in the Cologne cityscape. No matter if as large-scale murals, stickers on one’s own front door, or base plate within the pavement – urban art may be discovered almost everywhere, if one just takes some time out to have a closer look. Most obvious may be, of course, those large mural works that have been created during CityLeaks Urban Art Festival. Since 2011, the biennial festival has invited renowned artists from Cologne and the whole world in order to transform bleak facades and city walls into supersized artworks. After three editions, CityLeaks has thus turned many Cologne streets into massive outdoor galleries. Many murals – such as ROA’s dead rabbit in Ehrenfeld or Innerfields’ wanderer in Kalk – have evolved into distinctive landmarks of these Cologne neighbourhoods.

Yet also apart from the festival, much is to be discovered on the streets of Cologne. No matter if small paste-ups, stickers, tiles, or stencils, no matter if critical, funny or purely decorative – Cologne’s street art scene is as lively as it is diverse, its creativity seemingly limitless. Many places, such as Belgisches Viertel or Ehrenfeld’s Heliosstraße have lately evolved into true street art hotspots that seem to change their faces almost daily. As a result, many facades, doors or gateways have turned into total artworks made up of countless graffiti, stencils, paste-ups, and tiles. 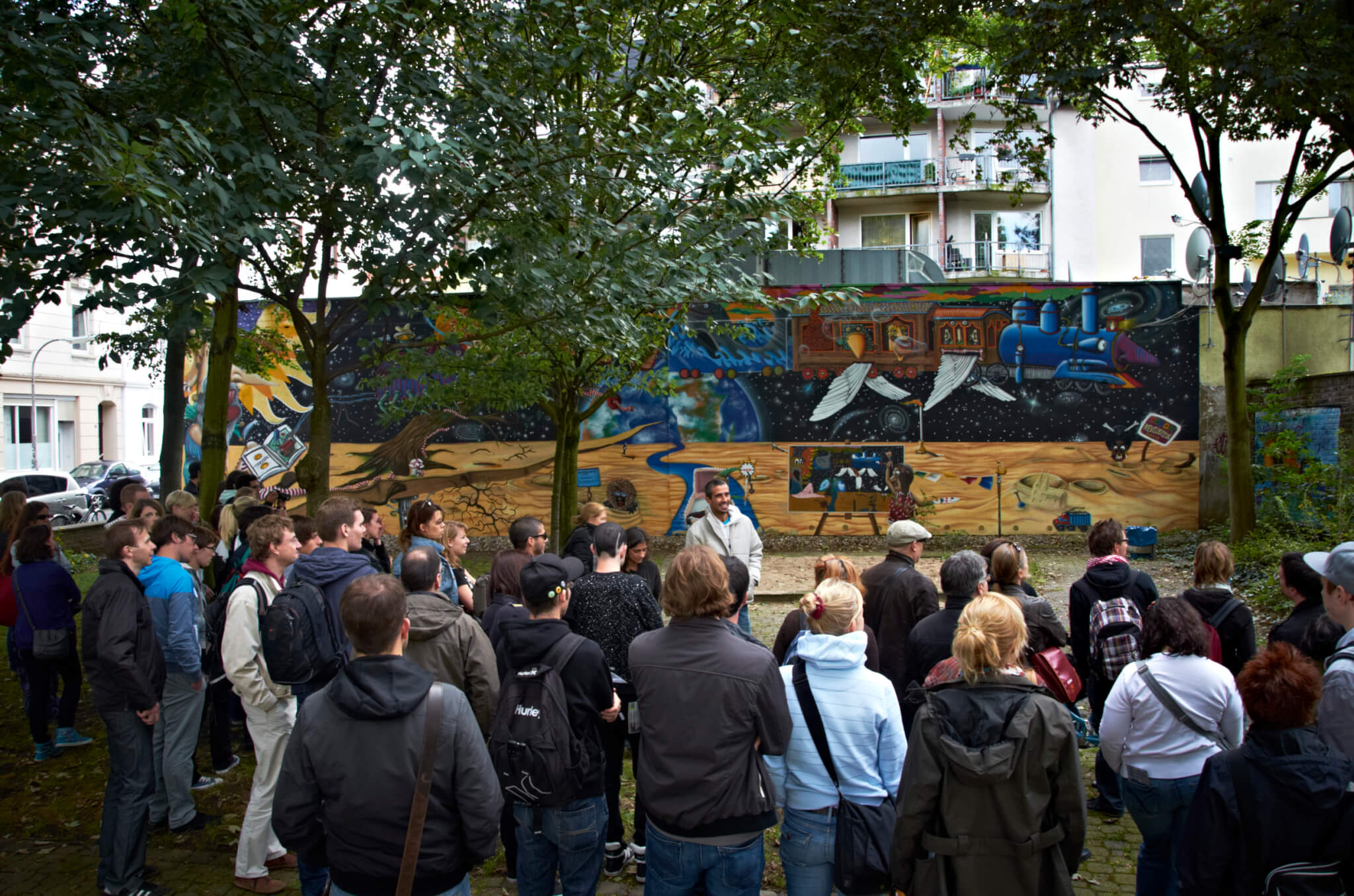 Since 2011, Cologne art association artrmx e.V. – initiator of CityLeaks festival – has offered guided tours along Cologne’s most exciting street art spots in Ehrenfeld, Belgisches Viertel, Nippes, and Mülheim on a regular basis. As a member of artrmx, I have organized these tours from scratch and continuously sought to extend their scope. Apart from our “classic” pedestrian tours, we do also offer bike tours that take visitors to more far-off artworks. Many tours also include a visit to selected art galleries that have specialized in street and urban art, such as Die Kunstagentin or Ruttkowski;68.

Our tours have reached out to a broad audience and are always well received. To many participants – including Cologne citizens – it always comes as a big surprise to discover art in places that they supposedly know well. Letting oneself in for urban art often enough entails getting to know one’s own neighbourhood in completely new ways! Above all, I want to open participants’ eyes to the whole range of genres, forms and styles within the urban arts. This way they become sensible towards all those manifold possibilities for creatively expressing oneself and intervening within public city space. Many participants have told me that after visiting one of our tours they have walked through Cologne with different eyes and started to discover new artworks everywhere. Moreover, I always aim at doing away with common prejudices against graffiti or art in public space in general.

For the upcoming months, I have once more set up a most diverse scheme of tours that invites you to discover the whole range of urban art on the streets of Cologne. Each of our tours takes about one and a half to two hours and costs 10 euro per person. Please book your tour online via rausgegangen.de (see links behind tour dates below). Individual tours may be organized for groups of 10+ people (also in English) upon request. My colleagues and me would be delighted to have you on one or more of our coming tours! 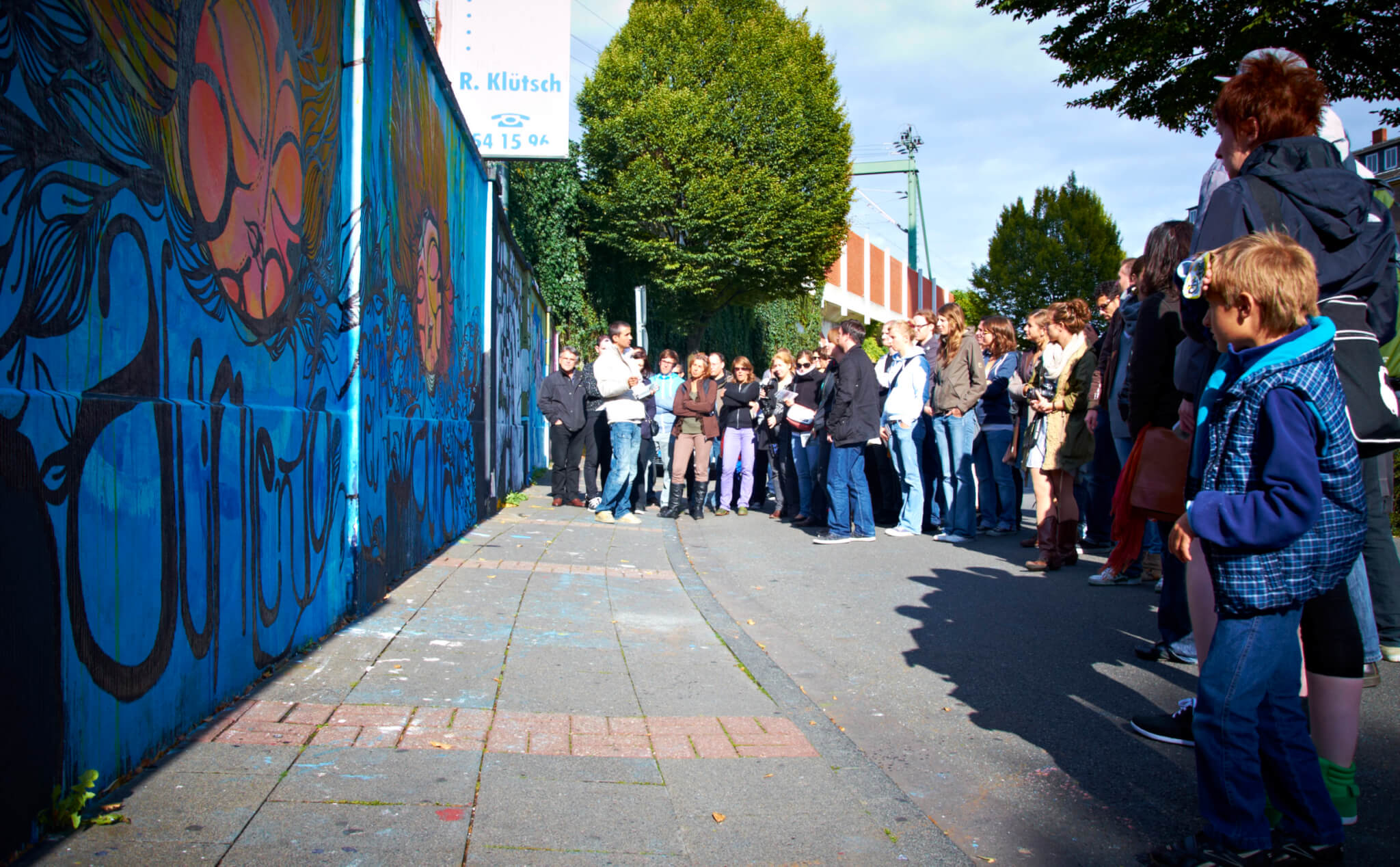 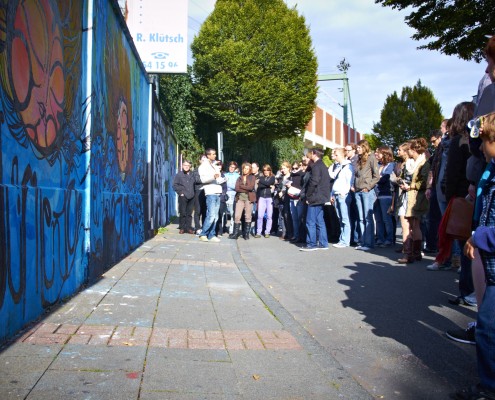 Tickets for these tours may only be booked in advance via rausgegangen.de.

The revenues from CityLeaks Tours are used for realizing the upcoming CityLeaks Urban Art Festival. With your participation in the tours you therefore support the festival and urban art in Cologne.

Further information regarding all tours as well as CityLeaks festival via:
cityleaks-festival.com

Requests for individual tours via: info@artrmx.com