Looking beneath the surface

Daylight never makes it down here. Often, there’s a nasty draught or it’s hot and sticky. Sometimes it’s frighteningly full only to become eerily empty again. And we only ever come here to get from A to B. Nonetheless, Cologne’s underground stations are totally underrated works of art that brighten up people’s lives. An ode in eight verses by Ralf Johnen.

We’ve all been there – after a long night out in the Ehrenfeld district, your legs feel like lead in the morning and the trip home is going to be loooooonnnnnng. Still, there’s nothing you can do – it’s off down into the catacombs of the underground! And that’s where it suddenly catches your eye – a sculpture, made up of bare light bulbs, that seems to be floating above the escalators down to the platforms. The sculpture is pyramid-shaped, albeit hanging upside down from the ceiling and looking more like some huge insect. A bold and brash shout-out to the people of Cologne. An installation as unique as it is improbable, created by Gerd Winner in 1989 when lines 3 and 4 were extended into the northwest of the city.

Crime series have often depicted this station as a bit suspicious due to the tiles in their wide-ranging shades of blue and the cold atmosphere they supposedly evoke. But actually, the concourse level is full of beguiling motifs. The pillars that hold it up are framed by octagonal patterns. The coloured stripes along the walls produce a rigid horizontality and the panelling on the slightly too low ceilings adds a special dynamic to the space. Considering it was built between 1985 and 1987, the whole thing is really quite visionary and, like many of the city’s underground stations, “very instagrammable”.

This station is not that old actually. In fact, the first 1.4 kilometres between the Hauptbahnhof (central station) and Appellhofplatz stops wasn’t opened until 1968. A lot of the stations from the early days of underground travel in Cologne feature tiles – in a similar style to Friesenplatz. But the stations in the Ehrenfeld district are a little harder to place in terms of when they were built. The Leyendeckerstraße station, for example, with its escalator handrails lit from below, extremely symmetrical lighting and the slightly psychedelic ceiling in its tunnels, could have been built in the 1970s. In fact, however, artist Ulrike Utaz designed this spaceship-like vault in 1992. It’s another one of those stations that makes you feel you’ve bought a ticket for an underground journey through time.

Another good example of how the stations in Ehrenfeld serve as artistic spaces and not merely as transport hubs. The side walls of the concourse level are adorned with patterned light installations in colours that range from white to yellow to orange, again creating a disco feel reminiscent of the 70s. The sculptural arrangement of the neon tubes is testament to a keen sense of symmetry. If this station were a bar, it would definitely be full of all kinds of hipsters, night after night.

The “play station”. Why? Because the platform level features a piece of art that immediately puts a smile on the face of every music fan. Against the bright yellow, tiled background there’s an equally bright, red pictogram, consisting of a horizontal arrow with a vertical line next to it. On generations of tape recorders that was the symbol on the play button you had to press to start the tape. Music to our eyes!

Once again, light blue, dark blue and white tiles dominate the walls. The pillars between the platforms, the horizontal lines of the overhead panelling and the platform ceilings provide an eye-catching supplement to the range of geometric shapes to be found here. The most aesthetically pleasing aspect, however, is the wall-mounted seating units, each for two people. It’s easy to imagine Wes Anderson (of “Darjeeling Limited” and “Moonrise Kingdom” fame) shooting scenes for his next film here. Perhaps with Adrien Brody and Owen Wilson on the seats? 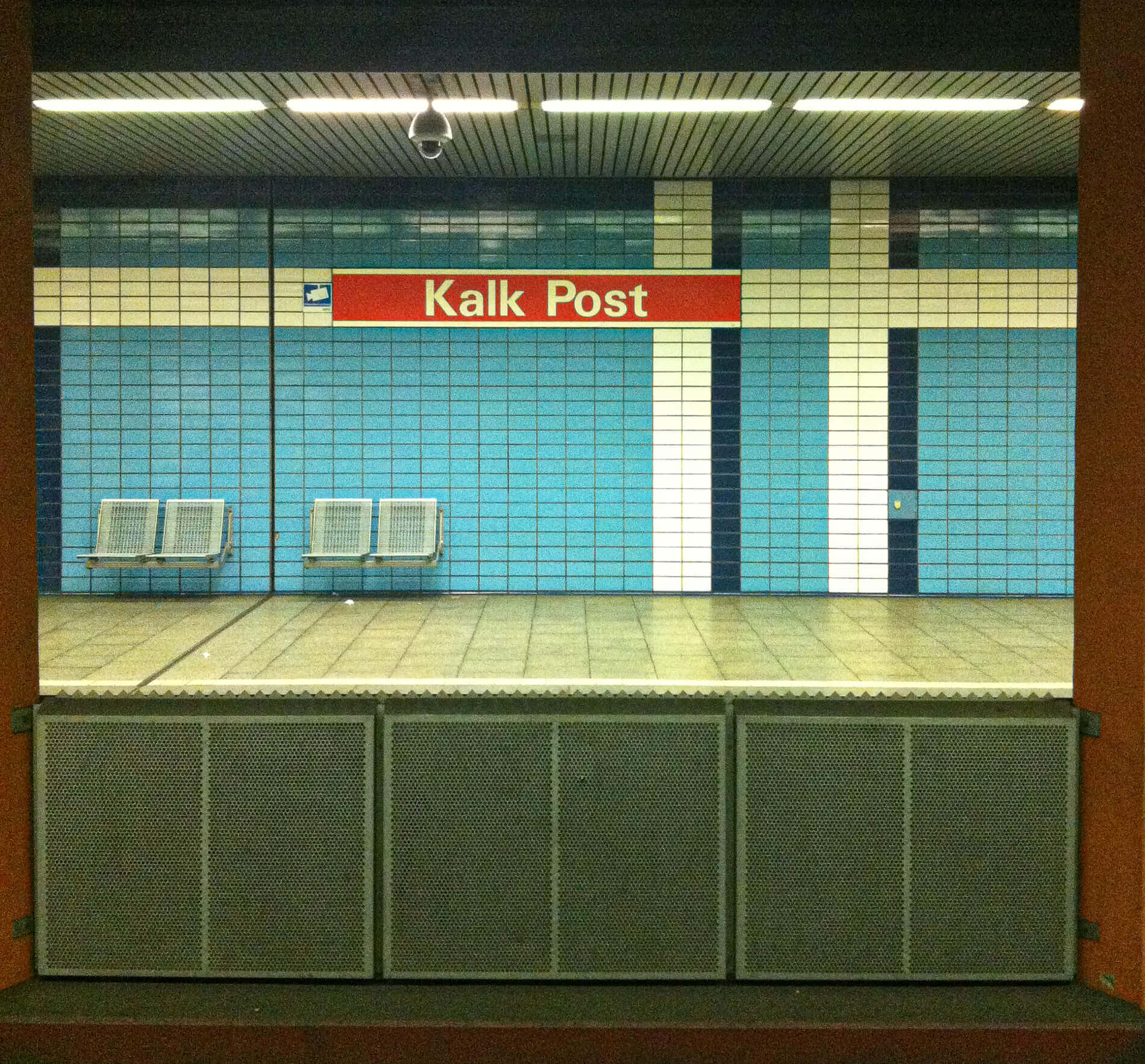 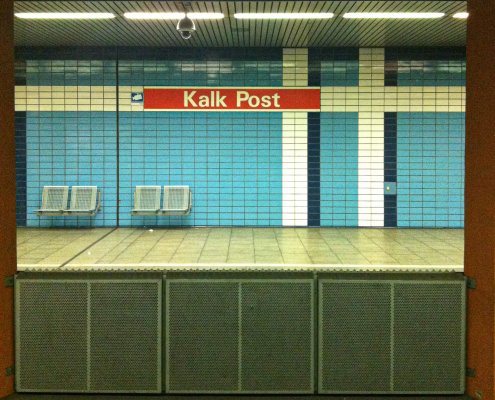 Opened in 2015, this station belongs to a new generation and represents a completely different style. The underground line from Hauptbahnhof to the south of the city may not yet be finished, but the Chlodwigplatz station, designed by Cologne-based firm of architects Schaller/Theodor, takes the aesthetic of past expansions and puts a modern spin on them. Although the generously sized concourse is oval-shaped here, the elaborate lighting and the toadstool pillars are definitely reminiscent of the stations in Ehrenfeld. Other eye-catching elements are the huge escalators (ready for the masses of passengers to come) and the stylised graffiti on the walls.

Another favourite from the modern era. Opened in 2013, the well-documented collapse of the city archive and the resulting delays in the construction work have meant that this station hasn’t been able to be used as planned yet either. Nonetheless, architect Ulrich Coersmeier’s design, with its open spaces and a clever combination of straight lines, steps and curves, is awe-inspiring. There’s a new colour scheme (also to be found at Chlodwigplatz) of grey, yellow and black, which looks likely to cause the same confusion as the Ehrenfeld stations in just a few decades. The dimensions of the Heumarkt station call to mind futuristic megacities and it’s difficult to know whether the inspiration came from Asian capitals or a sci-fi movie. Either way, it’s already a classic that just makes you want to ride up and down the escalators – even if you’re not really going anywhere.