Hints for even more amazing Carnival days and nights

The great thing about Cologne Carnival is that it’s so easy to enjoy. Even if you haven’t got a clue about the customs or don’t know the lyrics to the songs, you can just dive in head-first and have a great time anyway. But beware of just following the crowds – they’re typically headed for the more standardised type of street party. If you’re interested in something a little different, these alternative local varieties of Carnival are definitely worth checking out.

Opening party with the Nippes Bürgerwehr

Some would say that the tollen Tage (crazy days), the party-heavy days between Weiberfastnacht (locally known as Wieverfastelovend) on the Thursday and the following Ash Wednesday, are far too short. This party extends the period by two hours thanks to a trick: although Carnival officially opens for real at 11:11 am on Thursday at Alter Markt square, the clever people of the Nippes Bürgerwehr simply start with a liquid breakfast two hours before that on Wilhelmsplatz square, bringing forward their personal Carnival start to 9:11 am. Cheers!

Did you know? Don’t be put off by the scary name Bürgerwehr (which literally means militia) – these soldiers are quite harmless. Also, the Bürgerwehr people are known as Appelsinefunke (Apfelsine means orange) owing to their orange uniforms. 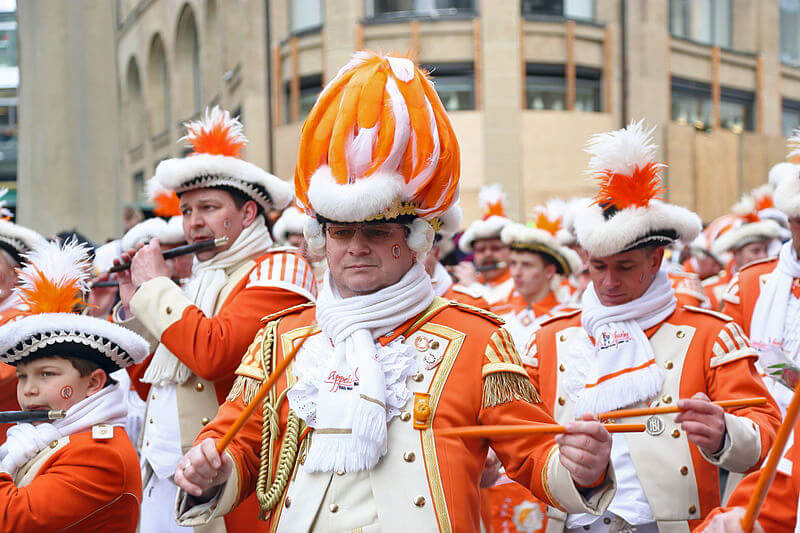 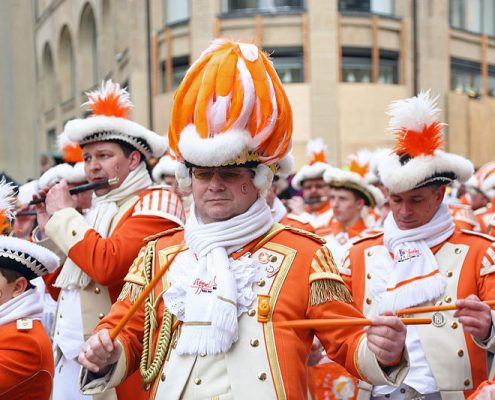 No doubt, from Weiberfastnacht (Thursday) at the latest you’ll be infested by the season’s earworms: an endless loop of “Die Karawane zieht weiter, der Sultan hätt Doosch!” (the caravan’s on the move, the sultan’s thirsty), “Mer losse d’r Dom en Kölle!” (the Dom stays in Cologne) and of course the classic “Da simmer dabei, dat ist pri-hi-ma!” (an untranslatable Cologne anthem – never mind, you’ll learn it). The repertoire is great fun, but also a bit repetitive. A few years ago, the Lossmersinge collective decided to go on a mission and enrich the Cologne Carnival song repertoire. Its members swarm out to selected Cologne pubs, distribute printed-out sheets with lyrics and induce the audience to learn a couple of new tunes. This creativity and initiative of the Loss mer singe style is just one of the many things that make Cologne Carnival so special.

Did you know? All proceeds from the Lossmersinge initiative are donated to charity. 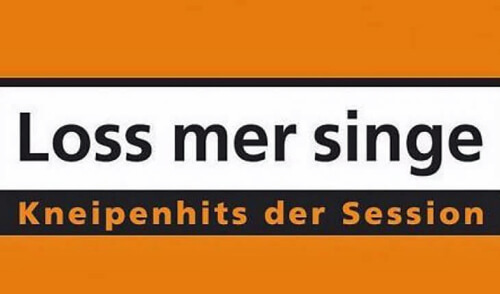 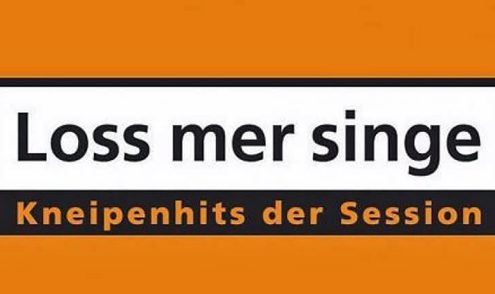 It’s plain to see that Carnival is increasingly taking its cues from contemporary party culture – and that includes pop culture, which is starting to encroach on a scene that used to be dominated by traditional local Carnival associations. A recent arrival on the scene that has met with an ecstatic reception is Karnevalsport, whose atmosphere is probably best likened to that of a late 1990s Take That concert (before Robbie left). Rhythmusgymnastik is also always a magnet for pop culture icons – even Marteria, the platinum-selling hip hop act from decidedly non-Carnivalesque Rostock in the northeast, has been known to enter the danger zone of Cologne Carnival.

Check this out: This video clip from a couple of years ago documents Marteria’s appearance at Karnevalsport (and more)

Even if you hate Carnival with a vengeance, there’s no escaping the televised Prunksitzungen, the lavish traditional Carnival stage-shows. Zapping through the TV programmes during the Carnival period, there’s a real and present danger of getting sucked into a broadcast of “Mainz, wie es singt und lacht” (Mainz as it sings and laughs) or similar, complete with fanfares, oompah music and weirdly dressed figures draped with Carnival medals standing in barrels holding speeches. One’s first instinct would be to switch off in disgust – but wait. The Büttenrede tradition – literally barrel speechmaking – is a regional variation of regular stand-up comedy that translates perfectly to Carnival. Stunksitzung is a great example of how successful it can be. Born in the 1980s as a counterweight to mainstream Carnival, this subversive show immediately acquired a brand value of its own. The speeches are more biting, the jokes more subtle and the subject matter highly topical. Today, Stunksitzung is a firm fixture on the Carnival calendar even for the most confirmed of Carnival haters.

Did you know? The term “Stunksitzung” may be used in the singular, but it’s actually a series of shows. This season, the Stunksitzung team will perform 70 times.

So you’ve been told that Carnival is always colourful, silly and slightly hysterical? That myth is perfectly busted by Geisterzug, a ghost parade and ghoulish alternative to the traditional Rose Monday parade. There’s no fanfares at Geisterzug – instead, the parade is lit by torches and accompanied by eerie drums and snakes its way through the city in the dark, creating a special and almost archaic atmosphere. Halloween pales in comparison to this impressive experience.

Did you know? If you own a drum or similarly loud device, you are welcome to register and take an active part in the parade rather than just watch.

It doesn’t always have to be the Rose Monday parade, where you’d have to be very lucky to find the ideal spot with unobstructed views of the floats, unless of course you claimed it in the early hours of the morning before. Why not try one of the countless less crowded but equally fun Veedelszüge? Veedel is of course vernacular and means quarter or district. Here, too, you’re guaranteed to be rewarded with plenty of Kamelle (flying sweets) and more, but you’ll have a better view of what’s going on without having to arrive on the scene before the sun comes up.

Did you know? If you still want to see the Rose Monday parade, local TV station WDR traditionally broadcasts the entire affair live, so you can watch in your pyjama costume.

Cologne doesn’t just have, I quote, the “geilste Arsch der Welt“ (“the sexiest ass in the world” –  incidentally also the title of a gay and lesbian anthem), it’s also well-known across the country and beyond for its highly active gay and lesbian scene. And far from shutting down during the Carnival period, it barrels ahead full-throttle. One of the highlights (that’s also explicitly hetero-friendly) is the series of shows known as Röschen Sitzung (rose session). As every year, there’ll be an appearance by the city’s oldest gay Carnival club, Die Rosa Funken.

Did you know? Claus Vincon (who plays Käthe on Germany’s long-standing soap Lindenstraße) is a member of the Röschen Sitzung ensemble.

At first glance, telling someone to experience Carnival off the beaten track sounds trivial and obvious. But trust me, it’s advice that’s best taken. The best moments in Carnival happen entirely for free as you walk (okay, maybe stumble) through the city with your eyes wide open. Stay clear of the usual hotspots like the Old Town and Zülpicher Strasse; instead, venture down the many side streets where you might encounter a traditional Kölsch pub with loud music but without the heaving crowds. Sing songs you don’t know, have a chat to the friendly people you just met, and take your leave if the crowds get too close or annoying. Do all this and you might just hit the Carnival jackpot: getting dragged to a private party by some nice people you just met along the way. So keep your eyes peeled and the rest will happen.

Did you know? An amazing costume is the best way to start a conversation with random people on the street. Don’t just poke about your cast-off clothes at the last minute – make a real effort and prepare well. It will make all the difference to your Carnival experience.

So it’s Carnival Tuesday and you could swear you’re wearing a zombie costume although you actually went as Pikachu this year? Never mind. It’s completely normal to feel undead towards the end of Carnival week. In fact if you don’t, you’ve not been doing it right. On Veilchendienstag, the last day of the Carnival season, don’t let the mix of euphoria and exhaustion get you down – instead, rise up and celebrate. For tonight’s the night for burning the Nubbel, the straw puppet that you’ll see hanging outside the doors of many pubs. For over 200 years the Nubbel has symbolised the spirit of Carnival, absorbing all the excess and the boundaries that have been crossed in the days before on behalf of human revellers. In a solemn procession, the Nubbel is taken to meet its fate. Following some speechifying and theatrics, during which everyone present is required to murmur (or shout) “De Nubbel war’s!” (It was the Nubbel!), the Nubbel is finally found guilty and surrendered to the flames. This marks the end of Carnival, and Ash Wednesday is just a couple of hours away. 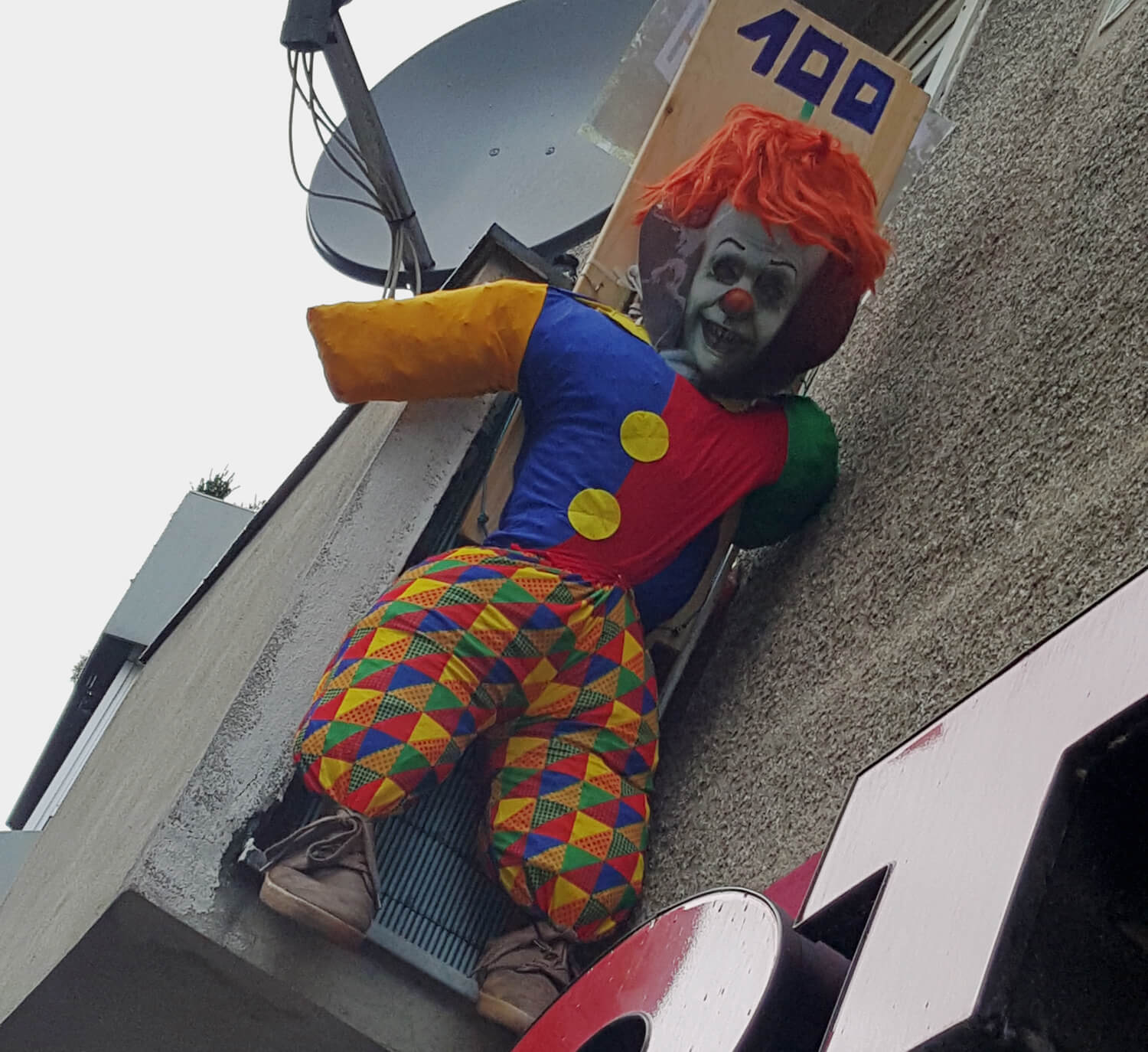 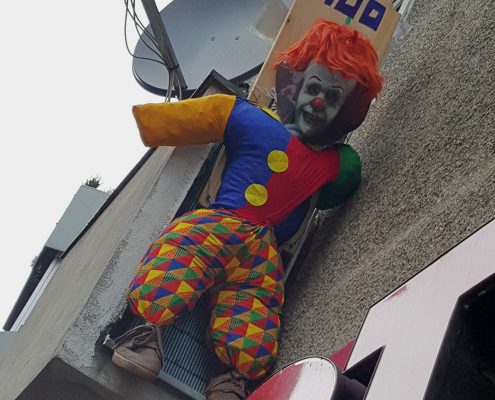 Did you know? When you’re out and about in the streets during Carnival, make sure you check out the entrance to the pubs so you don’t miss the Nubbel puppets hanging there – some amusing, some quite scary.