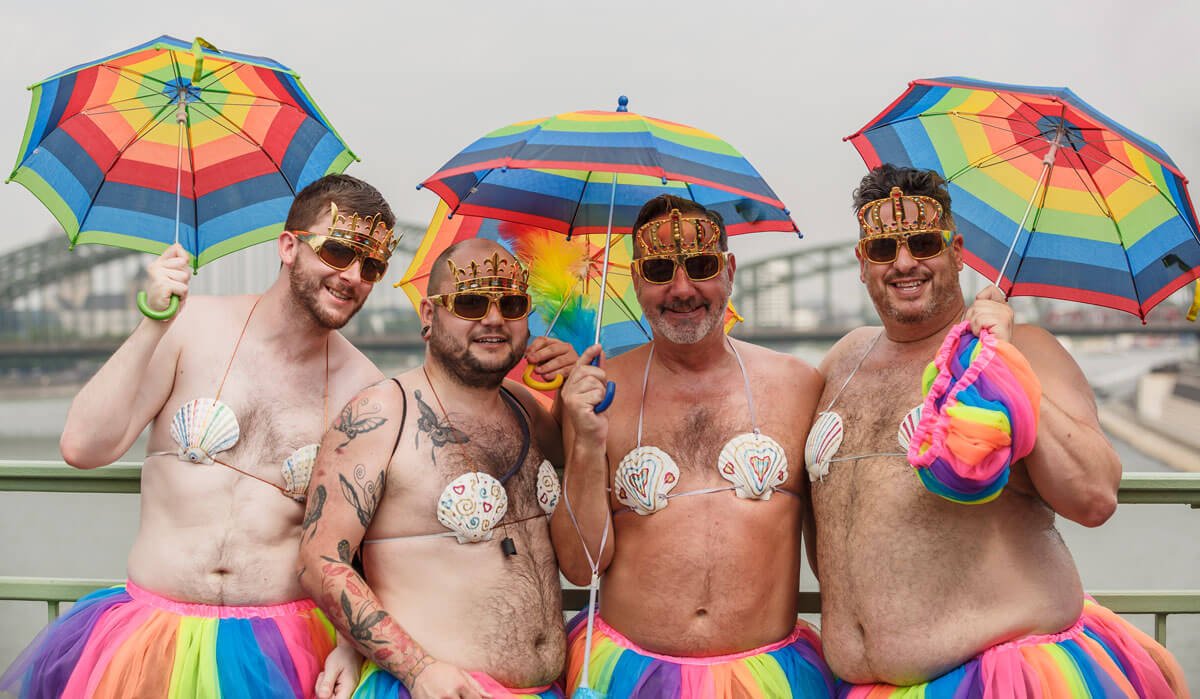 Out and about out with Cologne’s rainbow community

Gay clubs, lesbian bars, queer culture – Cologne is one of those cities where the LGBTQ scene has become naturally intertwined with public life. You can really feel the decades-long presence of the rainbow flag and the community it stands for, which has featured strongly in the city’s image for many years. Rather than being lived out in a clandestine parallel world, queerness is a permanent, visible part of Cologne. Despite, or perhaps precisely because of, that visibility, there’s still a lot to explore, as we find out in this short tour of the city’s LGBT scene.

By day, the area around Mauritiuswall and Schaafenstraße doesn’t seem much with its small collection of pubs and the muddled architecture so typical of Cologne. There’s something from every post-war period here, framing what at first appear to be a few bars that aren’t anything special. But anyone who’s been there after dark – or in the middle of the night – can tell you just how wrong that impression is. In the centre of the city, behind Rudolfplatz, straight off the ring road known simply as “der Ring”, this is where the LGBT revellers are to be found – on weekends and weekdays. You’ll often hear people asking, “So where are you from?” and the answers can be as diverse as the colours of the rainbow, with people from Belgium, the Netherlands and even further afield coming to enjoy Cologne’s unfailing party culture.

Even when it gets late – the doors might close elsewhere but not at Ex-Corner and co. Rather than the usual house beats, the DJs here delve deep into their party record collection, pulling out kitschy crooners and standard tracks from Cher to Erasure, interspersed with (local) favourites. It’s a little gay utopia that’s not at all insular in outlook. In fact, hetero party people are always welcome to join in the festivities too.

Mumu has a slightly more lesbian clientele. No surprise when you realise what “Mumu” means   But the doors are open to all and you’ll find gay guys, dolled-up drag queens and everything in between, enjoying their customary round of Kölsch with their female friends.

Cologne’s Christopher Street Day (also known as Cologne Pride) is always a bit like the queer community’s very own Christmas party – except that they hang the tinsel on themselves! Though there are similar parades in a host of other cities, Cologne holds the record for visitor numbers, not just in Germany. 1.2 million visitors come for the event and demonstration on Sunday, making it the biggest of its kind in Europe. Having said that, the size of the crowds is no measure of how good an event is. What makes it so special is the unmatched atmosphere, the incredibly creative looks and, of course, the fact that everyone gets involved, including those outside the LGBTQ community. The people of Cologne simply love a party!

Route, events and more at www.colognepride.de

This annual street festival is proof that the queer community are not nocturnal animals that shun the daylight. The Schaafenstraßenfest is a great place to see the LGBT community mingling with locals and visitors of all sexual inclinations, with live music, stalls and a lot of people.

Unfortunately, we do not have a date for the Schaafenstraßenfest at this time.

Singing to a different tune

Cologne’s gay and lesbian choir (known simply by its German acronym, CLCK) combines a love of the local region, Kölsch and singing to create an experience that’s both communicative and cultural. Singing brings people together and Cologne has the perfect songbook to do just that. In fact, that’s what the SLCK is famous for – far beyond the city and the gay community. If you’d like to see them live or perhaps become a member, you’ll find everything you need to know on their website, www.slc-koeln.de

Street festivals, ABBA songs, a party-until-you-drop approach to life… All true but if you take a closer look at LGBT culture you can’t really insist it’s a daytime world. After all, the pride aspect implies they are proud, proud of being different. And they have different rituals, particularly when it comes to dating, rituals that are very different to the hetero world. In fact, they don’t “go out on the pull”, they “cruise”. The old part of the city has a range of legendary pickup joints and Pullermanns is one of the oldest. Things can get pretty explicit here, with fetish nights on some weekdays and a dress code of “nude” after 6 pm on Mondays. You could just have a Kölsch here and a chat but that would be a bit of a waste…

Cologne’s slightly different outlook is perhaps best illustrated through a very special place of pilgrimage. In the historic Melaten-Friedhof cemetery there’s a very special tribute to Dirk Bach, one of the most colourful characters to have graced Cologne’s gay scene, who died far too early in 2012. A leading role in the city’s rainbow community, the late great (and we’re not just referring to his physique) comedian would most certainly have loved the pink bench that has been installed next to his grave, even if it does look pretty gay. After all, we all remember his outlandish, eccentric clothes, as last seen in his role as presenter of the German version of “I’m a celebrity…” The bench, donated by fellow LGBT comedian Hella von Sinnen, provides a touch of glamour and a place to pause and reflect, especially when you read the words on the gravestone, which translate as, “And those who die turn into stars.”